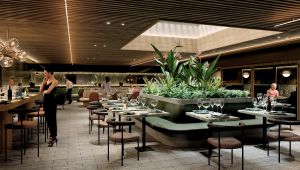 Words like “efficiency” and “streamlining” are important terms when dealing with green development. Maybe that’s part of Nuveen Real Estate’s thinking as it transfers some previously outsourced functions in-house instead.

The firm just launched its new development management services (DMS) arm for office and life sciences assets, with a keen focus on health, wellness and sustainability.  The new initiative made its debut at 780 Third Avenue, where Nuveen undertook a $40 million repositioning of the 50-story granite office building, transforming it into a lush, green oasis designed to support the well-being of its tenants’ employees as well as the environment. And, the repositioning is the first of many for Nuveen.

“We’ve always outsourced development management functions to third-party partners,” Brian Wallick, director of New York investments, office and life sciences at Nuveen, said. “But starting right before COVID we had an influx of projects that we were working on — a couple in New York, one in Miami, one on the West Coast — where we were, all at once, outsourcing those functions. Being practical, when you look at what you pay for development management, the numbers quickly add up over time.”

Money talks, but while the economic side of the equation may have been part of it, a compelling business case quickly materialized for Nuveen to create a development management vertical in-house. The firm had been mulling the development side of the business — whether redevelopment or new development — in the office and life sciences sectors for a while, and the stars seemed aligned as projects stacked up.

Further, “outside of the economics of it, there’s something to be said for business continuity and efficiency,” Wallick said. Indeed, the early pandemic days shone a bright light on the challenges of outsourcing, as the world worked from home and people tried — and often failed — to get fast answers and solutions for their assets and projects.

But, to kick off a new practice internally, Nuveen would need someone to lead it.

Enter Brendan Graham, who previously worked for OC Construction Management and had been consulting for Nuveen since March 2017 on some large repositionings across New York City. He and Wallick met in April 2019 when they initially started working on 780 Third Avenue together. In January 2021 — around 20 percent of the way through the asset’s repositioning — he formally joined Nuveen as its director of real estate development.

“The draw to come to Nuveen was that design and construction is such a small part of the lifecycle of an asset, so it was really intriguing for me to be able to work with colleagues in areas of the business that I didn’t know, and also see how my area of expertise layers into theirs, and drives a better investment outcome,” Graham said. “I would have been a bit of a fool, in my opinion, to not jump at the opportunity. And, it’s always fun to try and build something new.”

From the onset of 780 Third Avenue’s repositioning, there was a huge amount of focus on the asset’s sustainability, with health and wellness concerns paramount, even pre-COVID.

“I’d love to pretend that we knew where the world was going, but I think it was just some good game planning,” Graham said. “It was a big repositioning and such a transformative project, but it also became a really great opportunity to showcase what we could do and tie back to the mission of the company in terms of sustainability, health and wellness, and end-user experience.”

The 512,000-square-foot office tower underwent a makeover that brought an abundance of greenery to its tenants, satisfying post-pandemic cravings for nature, light and air within the confines of concrete office locations. Nuveen also added a 12,000-square-foot public park to the property, and upgraded its amenities to include a state-of-the-art fitness and wellness center and a restaurant by David Morton — of The Morton’s Steakhouse family — to boot.

The emphasis on sustainability is rooted deep in Nuveen’s core. In March 2021, Nuveen Real Estate committed to a net zero carbon global portfolio by 2040. Nuveen is the investment management arm of TIAA and Graham is also currently working on TIAA’s build-to-suit corporate center in Frisco, Texas, bringing in solar panels and layering in tiers of renewable energy to ensure the development’s construction is conscious of the net zero goal while also not impacting the end-user experience.

“I think we’d certainly like to be known for sustainability, health and wellness, and we want to be seen as cutting-edge,” Wallick said. “We also went through this experience at 730 Third Avenue, running its redevelopment.  It’s unique, because it’s also our headquarters, and we’re tenants there. So I think we approached 780 Third as though we were the tenants there, too. So, ‘What do tenants want? What do people want in this day and age in terms of sustainability, health and wellness?’”

In addition to New York and Frisco, Nuveen’s DMS services are being rolled out in other markets, including Boston and Miami. In Miami, Nuveen had two assets that were due for renovation. The asset manager had begun going through all the redesign plans and the entitlements, and was deep in the weeds. “There was a great opportunity for me to step in and allow them to focus on the actual business plan for the asset instead,” Graham said.

And, while redevelopment and repositionings may be the main focus for now, Nuveen is also currently engaged in four ground-up developments across the country, varying in degree. “I don’t know if I’d say there’s going to be more ground-up development in our future,” Wallick said. “But, I’d like to think that if the right development opportunity came and the economics made sense on the underwriting, we’d look into it.”

Wallick and Graham are specifically focused on life sciences and office assets, but Nuveen Real Estateother groups within Nuveen — industrial, multifamily, alternative asset types — have also launched DMS initiatives. Further, the implementation of in-house DMS was already firmly in place in Nuveen’s European and U.K. offices. “It’s the framework that they’ve had for a long period of time,” Wallick said. “I think in the U.S. we’ve just been a little bit behind them for whatever reason, but over the last couple of years it’s a trend that’s definitely starting to accelerate.”

And, now that they’re off to the races with office and life sciences development, there’s no looking back.

“Brendan is making us on the asset management side, and definitely the acquisitions team, a lot smarter,” Wallick said. “I’m learning more about the construction side of life sciences. It’s making us all more connected, and it’s making more of our employees across the board well-rounded, which I think is incredibly beneficial.”